The sails obtain from the wind the energy required to overcome the resistance. This energy is then made available to the boat through the rig. But the boat can only use a fraction of that energy in increasing its speed. The majority of the energy is lost in different mechanisms, each representing an individual resistance force that adds up to the total resistance experimented by the boat.

Each boat has its own characteristic resistance-speed curve. The thrust pushing the boat forward equates to the resistance force in a boat sailing at a constant speed. If the thrust exceeds the amount of resistance, the boat accelerates, but as the velocity increases, so does the resistance. Hence, the acceleration starts to decrease until it becomes null, and the yacht finds another point of equilibrium at a higher speed. When the resistance exceeds the thrust, the boat decelerates until it fully stops.

Considering everything else the same, a boat featuring a lower resistance-speed curve will require less thrust, i.e., less energy, to sail at the same speed than another with a higher curve.

In other words, if both of these boats had the same amount of thrust, the one with a lower resistance would sail faster.

But what are those individual resistance forces, and what are the mechanisms behind them?

The resistance forces opposing forward movement in a sailing yacht are typically broken down into:

Often, the resistance is also divided based on how it is measured. From this perspective, they are classified in:

It is essential to know the mechanisms behind the generation of the resistance and how the hull and appendage volumes, shapes, and profiles relate to it. This knowledge is very important so that we can make the resistance of a new design match the project’s overall performance goals. In the following, we will take a look at how the resistance is created.

The wave-making resistance, or wave resistance, is due to the waves a boat creates as it moves.

Sailing yachts move through the air-water interface, where two different fluids of two very different densities, air, and water, enter into contact. As the boat moves, it modifies the water’s speed and pressure around it, producing a variation on the water level (the air’s weight cannot compensate for it), which generates a wave system that travels together with the boat. Developing and maintaining this wave system requires a constant input of energy from the boat. Thus, instead of being used in increasing the speed, a part of the energy obtained by the sails is lost.

At low speed, the wave-making resistance is small compared with the viscous resistance. However, as the yacht speed increases, it becomes more and more important until it grows into the most important component of the total resistance.

The English engineer William Froude was the first to understand how a moving hull creates a wave system and how this phenomenon causes resistance to motion.

When a yacht sails upwind, the wind pushes the boat away, making it drift leeward. The yacht moves with a leeway angle, and the incoming water attacks the boat (hull, keel, and rudder) at a certain angle of incidence. Under these conditions, the speed profile of the water at the proximity of the boat changes, decreasing the pressure on the windward side of the submerged parts and increasing the pressure on the leeward side.

This difference of pressure makes a portion of the water on the leeward side (higher pressure) flow to the windward side (lower pressure) below the bottom tip of the hull, keel, and rudder, leaving behind vortices that contain rotational energy extracted from the boat, and therefore slowing it down. This phenomenon is especially important at the keel and rudder, where the local pressure changes abruptly, from higher to lower, at their sharp bottom tips.

It is essential to understand that when sailing upwind, the wind pushes the boat away, gradually increasing the attack angle between the water and the boat. In boats featuring keels or centerboards, as the angle increases, so does the induced resistance but also the value of a force called lift, which counters (opposes) the drifting force. Eventually, the drifting force and the lift force will be of the same value (if it does not stall before), and as they act in opposite directions, they will be canceled. At that moment, the boat will be able to sail windward at a constant leeway angle without drifting more. The lift force and the induced resistance (or drag) are intimately interrelated. Without one, there is not the other. Therefore, a certain amount of induced resistance will always be necessary for a boat to be capable of sailing upwind.

A yacht that encounters waves while sailing, e.g., wind-generated waves, will see a reduction in its speed. In other words, the waves develop an additional resistance that opposes the boat’s forward motion. This resistance is known as the added resistance in waves.

When a boat is heaving and pitching in a seaway, it generates additional waves that are propagated in all directions from the boat. These waves are superimposed to the wave system of the wave-making resistance. The creation of these additional waves needs energy, which can only be obtained from the energy made available by the sails, thus reducing the energy available for increasing the boat’s speed.

The characteristics of the encountered sea waves (wavelength and frequency) and the geometrical characteristics and mass distribution of the boat play fundamental roles in the added resistance in waves.

A sailing boat fitted with a propeller develops further resistance when sailing. The propeller creates viscous (frictional and pressure resistance) and induced (due to the propeller blades) resistance, especially when the propeller is blocked (not free to rotate) so to reduce wear on the shaft, the gearbox, and the bearings. 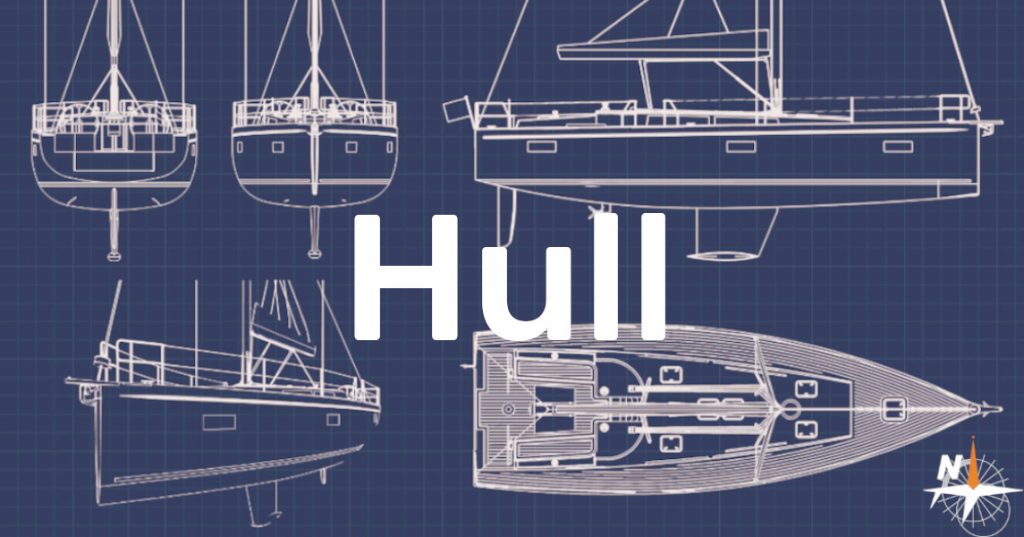 The frictional resistance is a force that is generated when the underwater parts of the boat and the water around are in relative movement (the boat moves through the water, or, in other words, the water passes down the boat). Therefore, it is a hydrodynamic force, and as a resistance, it works in the opposite direction to the movement, trying to slow the boat down. 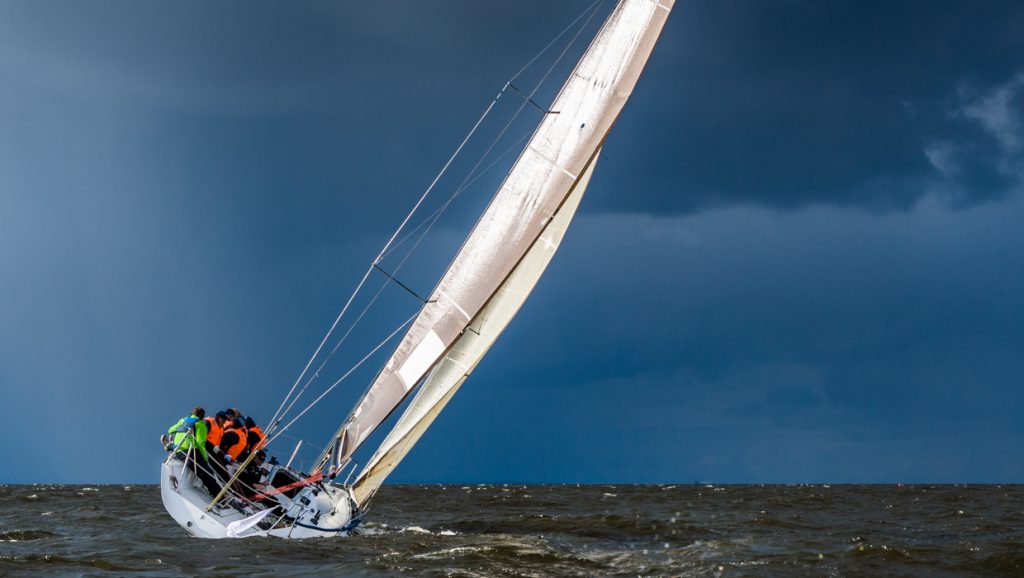 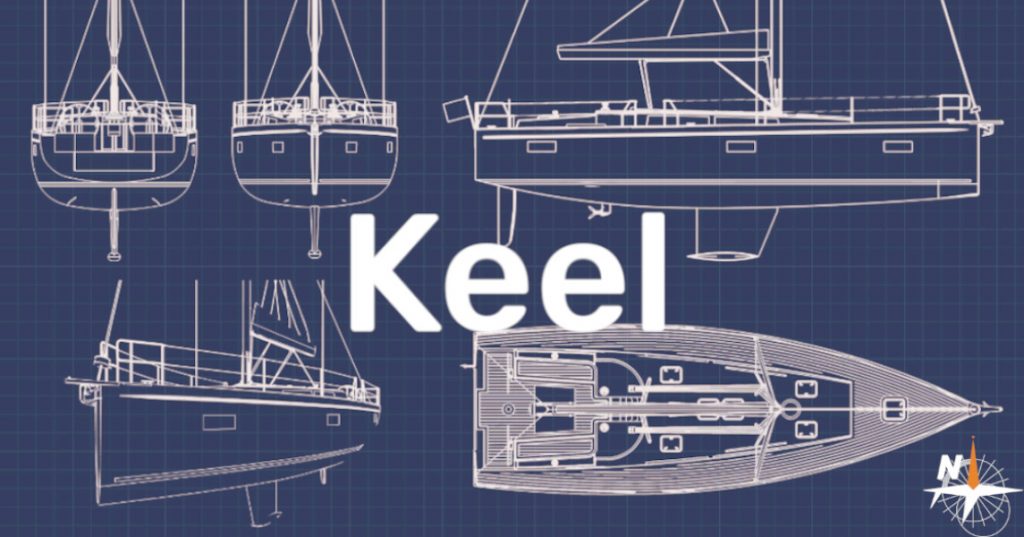 Residuary resistance of the keel upright and heeled (calculation)